For over 100 years St. Mary of Czestochowa Parish has provided that basic spiritual need by offering daily Mass, Sunday Masses and special services in three languages, novenas, missions, a place for the adoration of Christ in the Holy Eucharist and a sacred and beautiful space to celebrate the reception of the sacraments.

St. Mary of Czestochowa Parish takes it’s name from the miraculous shrine dedicated to Our Lady in Czestochowa, Poland.   It had its humble beginnings in 1895 in a little wooden church in a section of Cicero called Hawthorne, south of 30th street between 48th court and 49th avenue. Families from Poland and Germany settled the area to work in the nearby limestone quarry, but later as many factories provided employment Hawthorne and the Parish grew.

The immigrant Poles wished to hear the Mass in their own language, and some would travel five miles on Sunday to established Polish parishes in Chicago.   In 1892 a meeting was held to formulate plans for a new parish, and after overcoming many difficulties the Rev. Casimir Slominski was appointed pastor to the fledgeling parish numbering about eighty-six families. The hall which served as a temporary church and living quarters for the pastor, and even the new wooden structure built at a cost of $5000 would not serve the parish for long.

The Rev. Bronislaus Czajkowski became the third pastor of St. Mary of Czestochowa Parish in 1904 and continued to serve the congregation for thirty-five years.   This was a period of tremendous growth and expansion.  In January, 1905 construction began on the brick church and school combination, and by December of the same year the building was blessed and two hundred and forty families had a new space for worship and education. The Sisters of St. Joseph of the Third Order of St. Francis were invited to teach in the parish school, and in 1908 a convent was built to provide living quarters for them. The rectory was completed in 1917 while work continued on a new gothic style church which was completed in 1918 and blessed by Archbishop Mundelein.   These four structures, remodeled and renovated, remain in use today.

The history of a parish is also the story of a community and its people. Stefan and Pelagia Bartoszak owned a hall, and in 1895 transformed it into a church and school combination. „Old Timers” fondly call St. Mary’s School „Mlyniec School” because Mr. Theodore Mlyniec was the second parish organist and also taught in the one room parish school. Andrew Chybiak and Elizabeth Chalupka were the first couple to be married in the new parish.   It was a sad occasion for the community and parish when on July 24, 1915 800 employees of the Western Electric Company died as the Eastland excursion boat capsized in the Chicago River. Twenty-nine parishioners lost their lives in that tragedy and were remembered in a memorial Mass.

Anniversaries give us an opportunity to celebrate and to note change. In 1920 the parish celebrated its 25th anniversary with 800 families and 900 children in the school. The celebration of the parish’s Golden Anniversary in 1945 could not take away the memory of World War II and the many men and women from the parish who served in the military.   By 1970 with the celebration of the 75th Anniversary the Youth Center, although two blocks away, was part of the parish building complex. In 1995 the 100th Anniversary Mass was celebrated using the new altar made from part of the beautiful carrara marble altar rail.

Today St. Mary of Czestochowa Parish serves a diverse population. A number of parishioners, still actively involved, lay claim to having parents and grandparents who pioneered the parish. A young Polish immigrant population, although not living in the area, have strong ties to the Black Madonna and call St. Mary of Czestochowa their spiritual home. Just as great numbers of Poles and Germans settled in the Hawthorne neighborhood of Cicero over a hundred years ago, so today large numbers of people from Mexico have settled here, and the Hispanic presence is very much part of the parish.

On July 1, 2003 priests of the Redemptorist Congregation arrived to Cicero. The Polish Redemtorists began serving the spiritual need of this trilingual parish. Custom and language are part of celebrations, and St. Marys celebrates the Feast of Our Lady of Czestochowa in August with special Masses, procession through the neighborhood, ethnic food, and the final gathering for the ice cream social.   On December 12, the Feast of Our Lady of Guadalupe begins with Mañanitas at 5:00 A. M., a special Mass with the distribution of roses, and a social gathering enjoying hot chocolate.   Many couples choose St. Marys for their wedding and a bouquet will be placed before the icon of Our Lady of Guadalupe or Our Lady of Czestochowa all honor our Blessed Mother, but each following custom and tradition.

The church and school combination built in 1905 is still used today for the parish school and religious education programs. The convent building today houses the chancery for the Syro Malabar Eastern Rite congregation for the Diocese of the United States and Canada. The Youth Center building now called The Social Center provides a place for the school’s physical education classes, athletic program, an active senior group, and the public school preschool program.

A people of God form a parish to hear the gospel and to touch Christ through the sacraments. For over 100 years St. Mary of Czestochowa Parish has provided that basic spiritual need by offering daily Mass, Sunday Masses and special services in three languages, novenas, missions, a place for the adoration of Christ in the Holy Eucharist and a sacred and beautiful space to celebrate the reception of the sacraments.

A special treasure of the parish is the mosaic icon of Our Lady of Czestochowa enshrined in the high altar. Her left hand holds The Christ Child while her right hand points toward her Son inviting us to come to Him. St. Mary of Czestochowa church with its twin steeples towering high over all other buildings in the southeast corner of Cicero stands as a testament to the firm belief and courage of all who formed this parish. Today as we stand in the shadow of those twin towers we are reminded to hold on to our faith, express it with devotion, and accept the welcoming invitation of Our Lady of Czestochowa. 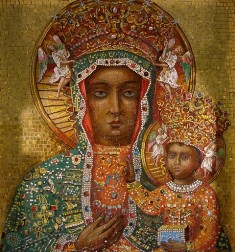 What is a Redemptorist? The Redemptorists are a religious order of men founded in 1732 by Saint Alphonsus Liguori. Their special mission is to spread the Gospel to the poor and most abandoned. They began this work by going among the poor and forgotten shepherds living in the hill country surrounding Naples in southern Italy.

At first, there was just a handful of men working with Alphonsus Liguori. In the Congregation’s centennial year of 1832, six Redemptorists (three priests and three Brothers) journeyed to America. Presently there are approximately 7,000 Redemptorists working for souls in most parts of the world. More than 1,000 Redemptorists work in the United States alone. C.Ss.R. Those four letters, „C.Ss.R.,” behind the name of a Redemptorist stand for Congregatio Sanctissimi Redemptoris. The official Latin title given to this religious order can be translated into English as „Congregation of the Most Holy Redeemer.” Members of the Congregation are more commonly called „Redemptorists.” It is a fitting name since they continue the work of Christ’s Redemption in a very special way. Their task is similar to that of the first apostles — to bring the message of salvation to all people.

The motto of the Redemptorists also reflects their mission and charism. Translated from the Latin, it is „With Him is plentiful redemption.” The Work of Redemptorists The first task of every Redemptorist is to work for his own heavenly reward. His second task is to bring other people to this same salvation and eternal happiness. The Redemptorists work toward this goal either as priests or Brothers.

The major types of work done by the American Redemptorists can be summarized thematically to give some idea of the diversity and scope of their apostolic endeavors.

Parishes
At the request of many U.S. bishops, the Redemptorists have assumed the care of parishes. American Redemptorist parishes can be found in big cities like New York, Chicago, Philadelphia, and San Francisco. You will also see Redemptorist parishes in small towns. Poor and abandoned souls are present everywhere–in the noise and clamor of a big city as well as in the quiet countryside. As parish priests, Redemptorists maintain the missionary zeal for souls taught to them by their saintly founder, Alphonsus Liguori.

Special Preaching
St. Alphonsus wanted his men to be preachers. They were to travel from town to town and parish to parish bringing the Word of God to the people. In modern times this often means a parish mission or renewal. A Redemptorist priest will go to a parish and each day, for a week or more, preach a special sermon calling the faithful to a fuller practice of the Christian life and a deeper love for God. There will be special devotions, visits to the sick, and also a time for the sacrament of reconciliation.

Redemptorist special preachers also conduct triduums and novenas (three- and nine-day periods of prayer). Their dedication to service makes them frequently called upon to preach retreats to laypeople, priests, Sisters, and Brothers.

Retreat Houses
The Redemptorists have traveled great distances to preach God’s word during the past two centuries. In the United States, they have found that by establishing retreat houses near populated areas they can also preach to the people who come to them.

A retreat may be priests, Sisters, or Brothers spending a week in a special union with the Father. Or it may be a weekend that laypeople will use to put their lives in order and give God a chance to work in them.

Special Apostolates
Some Redemptorists have been given a special talent to be used among his people. Others see a special need in the Church and do their best to fill it. Some American Redemptoristists do special work for the American bishops. Others serve as hospital or military chaplains. Still others feel called to work primarily with deaf Catholics, with the young, the old, minority groups, or migrant farm workers. These people are certainly among the most abandoned. The Redemptorists have been called to serve them in a special way.

Overseas Missions
At the request of the Holy Father, the Redemptorists have undertaken work in various countries as missionaries. American Redemptorists labor in Brazil, Thailand, and Nigeria.

By this missionary work they have fulfilled a dream of their founder, Saint Alphonsus, that his Redemptorists might spread the Gospel to the whole world.

Apostolate of the Pen
Following in the footsteps of Saint Alphonsus, who wrote more than 100 books in his own lifetime, American Redemptorists work to spread God’s message through Liguori Publications.